The Five Elements, discover how to use these transformation phases as a resolution tool

To develop ourselves as human beings and achieve our goals, being part of the whole that surrounds us, it is important to have knowledge of our potential (Qi) and how it is transformed, above all, knowing what are the elements that nourish us, weaken us and they inhibit us The idea is to implement a constant flow in thought and action in the personal and collective sphere (Human Qi), applicable within all circumstances ( Heaven Qi) in the space we inhabit and our environment. (Earth Qi).

Chinese thought has developed several applicable principles in all Eastern disciplines, based on the observation of nature, understanding that the human being is the connection with heaven and earth. In addition to the principle of  Yin and Yang that allows us to understand the interdependent division of Qi, this energy, in turn, is subject to constant transformation processes within its nature.

Let us remember that Qi, according to the Quantum field theory, is conceived as an imperceptible form of matter, which is present throughout space, being able to condense into solid materials, and also carries a mutual interaction in the form of waves. The interaction of these waves produce a transformation of matter-energy, which are not destroyed.

It is important to consider that the translation of five elements was given by the Jesuit monks when introducing Eastern thought in Europe, the archetype “element” implies a static concept, when what it wishes to express is a dynamic of movement.

Many times when we say five elements, we think of the material, but it is more than that, and we should not be confused since the five elements can represent action or inaction, state of mind and body, cause and effect.

With the Action we can have better results, it allows us to see the qualities of people, the action is what generates the change, the flow of energy. Different types of actions or potentials are attributed to each element:

What connection do the five elements have with nature?

The archetypes of the five elements “Wu Xing”, are Qi movements that dominate at different moments of time and it is likely that the origin is supported by the different phases that the earth goes through during its orbit around the Sun, which It allows us to appreciate how the magnetic force of the earth grows and decreases, explaining the dynamics of the seasons, allowing ordering and forecasting some natural phenomena during the course of a solar year and the weather.

Through the observation of the constant movement that allows ordering and forecasting some natural phenomena during the course of a Solar year and the weather, we obtain five types or phases of Qi that influence at different moments of time.

We believe that this principle in its beginnings was influenced by geographical factors, as China is located in the northern hemisphere, so the seasons of the year were attributed to the five elements, however, this thought does not agree in application with the season existing in the southern hemisphere, however, the earth is subject to the translation process around the sun, adjusting to a process of observing the earth as a whole. 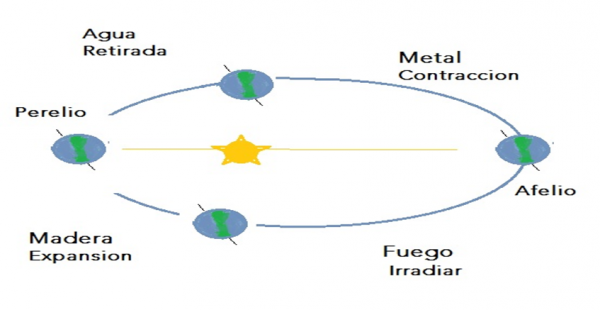 The orbit of the earth during the month of February begins its movement away from the Sun, it is an Expansion phase, from the vision of the cardinal points, the East, the Sun rises through it from Levante, an elevation effect is produced and of birth, characteristic of the classification of the dominant Qi of Wood.

The earth is influenced by the distance between the Sun and itself, it is impacted by the solar magnetic forces, everything is irradiated by the brilliance of sunlight, characteristic of the dominant Fire Qi classification.

When the earth reaches the farthest point from the Sun (Aphelion), the countdown begins to return to the point of origin, the force concentrates all its action inside. At a magnetic level, the Sun hides in the West, the sky is purer, it is a time of purification, cleaning, characteristic of the classification of the dominant Qi of Metal.

The last part of this trajectory indicates that the work is finished, the magnetic direction is North, which represents descending and cooling, characteristic of the dominant Water Qi classification.

This presence of the dominant Earth Qi as bridging energy can be seen in the composition of the Terrestrial Branches, of the Jia Zi Calendar, but for the elaboration of the principle of the five elements it was taking shape, they were reordered as follows: Wood, Fire, Earth, Metal and Water

Eastern thought, establishes the principle of the five elements or Wu Xing, being based on cyclical laws of nature, can be applied without mistake to all the arts of metaphysics: Chinese medicine, face reading, palm reading , astrology and Feng Shui.

By using the laws of nature for the evaluation of the existing qi, from the context of the Qi of Heaven (Time), Qi of Earth (Place) and Qi human (Man), we can identify and evaluate when the course of Qi presents a cycle that generates, weakens or decreases its flow.

What are the cycles that generate the transformation of Qi?

With the progress of scientific positions, which study the transformations of matter and energy, such as Thermodynamics, we believe that the concept of the cycles of the five elements, are coming to go hand in hand with science, it is not our intention of debating whether metaphysical thinking applied in its different disciplines is scientific or not, because for this, we would have to have a common parameter that is Science for the West and for the East, but yes, it is appropriate to indicate that many of the concepts oriental, nowadays they are on the table of the scientific world.

The behavior patterns or reactions of the movement of Qi are comprised of three different cycles:

The cycle of creation, the elements follow the natural course. The action performed by each of the elements will be to generate the next element. It is balance in motion. It is a Mother to Son relationship, where one element will help the other type of Qi, promoting it to bring out its properties and capabilities. In all the disciplines of Chinese metaphysics, it is the most used cycle to strengthen or favor the good flow of Qi. 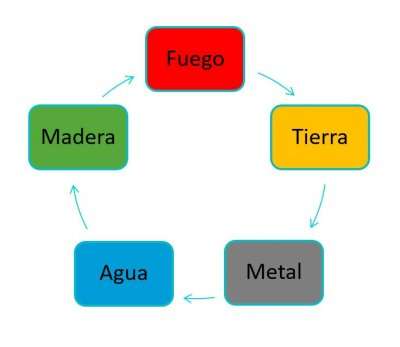 We say control cycle and not destruction cycle, because the matter-energy is not lost, but is transformed. In Chinese Medicine they call it the Inhibition Cycle, since it refers to the fact that one material inhibits the growth and function of the other, it is about keeping the element controlled under optimal operating limits. In Feng Shui it is good to see what predominant element, or what element is dominating the environment, is a way of seeing the control cycle.

The cycle opposite to the Generation Cycle, is the Cycle of Diminishment so the element weakens the creating element. It is a cycle that in Feng Shui, if well used, will help reduce the excess of unfavorable energy 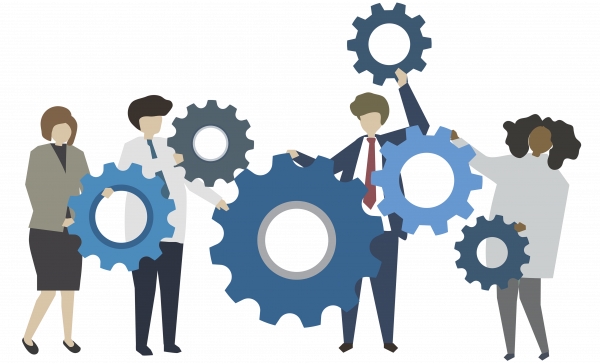 According to the approach, how to be more resolutive?

These three cycles are the keys to managing the proper handling of the flow of Qi, they give us tools to be applied in any situation depending on the approach, in order to seek balance, identifying what type of dynamic is presented.

When we know how to distinguish if the focus is directed to the Qi of Heaven-Earth or Man, we know how to intervene. If the established cycle affects the Human Qi, we know that the adjustment is based on action. If the focus is concentrated on Earth Qi, we know that the element that the shape of the introduced object, the shape of the building or home, for example, will be the right one to promote the flow of Qi. Centered on the Heaven Qi , the approach is based on the validity of time, to outline guidelines to consider possible events, it also allows establishing changes in patterns within a period.

Knowing these practices and the proper approach to apply them in Feng Shui will help us through the implementation of the action, the forms, the proper distribution and the colors to use to generate the Favorable Qi and control or weaken the Unfavorable Qi. in order to establish the flow of energy.