Yin &Yang…. The dance of opposites forces in Feng Shui (Part I)

The term Yin and Yang has become common words in our language, remember listening to my dowsing studies teacher, who named one of his students as the “Yang Woman” for her extreme strength and activity, from that moment I understood that in our western culture , we tend to see the two concepts as separate entities and not as a unit.

A completely dual unit that needs its counterpart to be analyzed. The teacher was not wrong, she was a Yang woman in relation to all the other men or women who maintained a more passive posture, Yin.

The eastern vision of understanding what is the approach and what polarities we are comparing on those inseparable opposites, is what makes the difference with the West.Many times, we see marketing strategies in the media and social networks that motivate clients to seek a Feng Shui consultancy as an immediate tool to solve situations of stagnation in areas of health, money or well-being.

Frequently, the Feng Shui consultant is placed in the position of magician or fortune teller, in addition to the title of decorator, when intervene within the spaces with adjustments that allow to activate the flow of Qi using shapes, objects, colors or a new distribution of furniture, creating interaction between matter and energy potential.

Few know that the favorable results obtained in a Feng Shui study are behind the consultant’s work of creating communication between the person consulting and the occupied space-time, through the analysis of the multiple layers offered by the San Cai that allows to raise the tangible or intangible of the Qi of Heaven, the forms and non-forms of the Qi of the Earth and the conscious or unconscious posture of the Qi of Man.

Regardless of the analysis methodology used in a study, (Xuan Kong Fei Xing, Xuan Kong Da Gua, Ba Zhai, Purple White, etc.) at the moment, I invite the use of the basic principles of Yin and Yang, whose dance energy between the two poles broadens our vision of the place to be analyzed and facilitates the implementation of the appropriate adjustments.

The principle of Yin and Yang

The relationship between Yin and Yang in Eastern thought are expressed in four basic laws based, used in different disciplines such as Chinese medicine, Qi Gong, martial arts or Feng Shui.

In addition, these are the Basic Laws of Yin and Yang Theory:

The Yin and Yang are part of a whole, they are the base. They are unified, in order to exist there must be their opposite, both influence each other. To develop everything will depend on the interactive balance between them. Between matter and matter, between function and function there is always a relationship of interdependence.

Its state of opposites is always in continuous mobility. The movements are absolute, but the balance is relative, that is, within its movement there is a relative stillness and vice versa.

Each year the seasons continue their cycle, from spring to summer, from summer to winter where Yang and Yin decrease and increase in the process, if the balance is broken, it can cause losses in the agricultural sector, for example.

In a certain reality the characteristics Yin and Yang can evolve one into the other. Under certain conditions, there may be a natural evolution, they show us that under normal conditions a harmonic transformation occurs. However, there are aspects that can produce an abrupt change in the opposites.

According to the focus of attention, the Yin and Yang can be seen as: 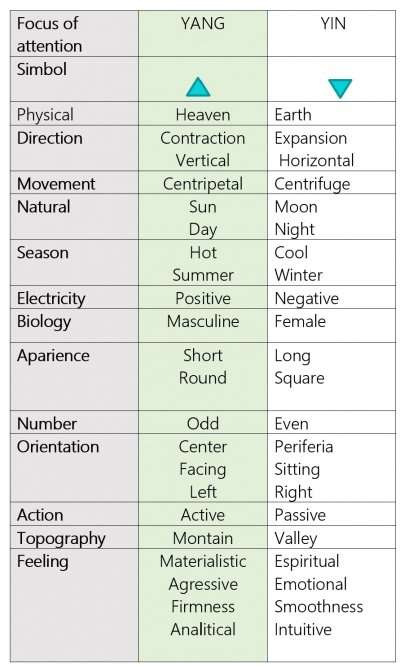 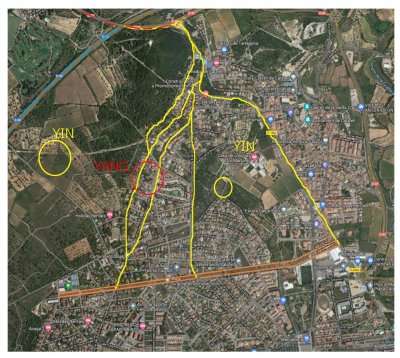 The study of the continuous dance between Yin and Yang begins from the moment the client calls us indicating the location of the place to consult. We begin our search by observing from the macro, outlining a Taiji on the house, commercial premises or plot. Just knowing where the Yin or Yang potential is located suggests how these energy flows in the environment could behave in relation to their opposite side.

For example, this is a study of a house that will be located in the urbanized area Yang in relation to the agricultural area of ​​its surroundings, it shows us the relation of Movement or Stillness between them and the comparison between Life (Yang) or Death (Yin) of the environment.

The Yang urban area still conserves some Yin area of ​​undeveloped land and a cemetery in the area, in the future it will continue a transformation process becoming a more yang area if the little plot that remains is urbanized, however the cemetery it would be that small yin part existing in each Yang. 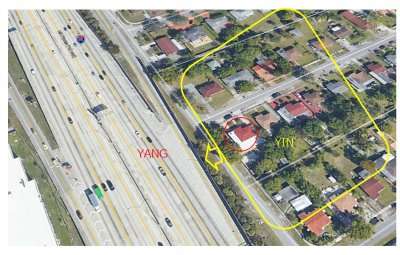 The principles of Yin and Yang guide us for the evaluation of a place, as in the case of the house indicated with a circle in the photo below, we see the relationship Yin and Yang of Movement and Stillness, between the traffic of the Highway and The urbanization.

As a result, the constant traffic caused in the 80s the request of the neighborhood for Rejection or Acceptance of pollution and noise caused by high traffic, the state made the adjustment to place a noise barrier to reduce the damage to the health of the neighborhood.

In this consultancy we can appreciate the difference 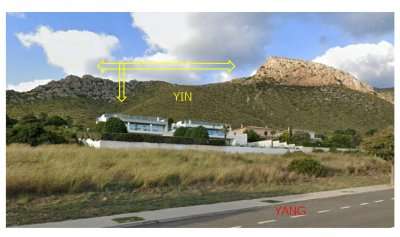 in Hardness and Smoothness between the sitting mountains, the house studied is a semi-detached house on the far left, it was built in mid-2009, without analyzing the Star Map, the house took longer to sell in addition to having changed owners several times, curiously the three neighboring houses were sold since their construction, however the house on the extreme left formation whose sitting has a harder in shape and relief. 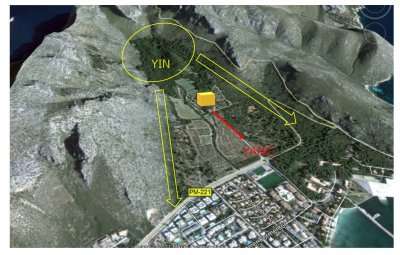 This house represented with the yellow cube, was built before the development of the beach area in the early 1920s, it is currently a ruin,it has been for sale for more than 20 years. TheEnvironment gives us guidelines on how the Qi can Collect or Disperse in relation to the narrow sitting and an open facade showing factors that influence the home.

We observe the energetic duality of how the potential of Yin and Yang is Reduced or Increased, if we compare both sides of the mountains, on one side we find a road with increasing traffic movement during the summer, more yang season and, the other side shows the skeleton of the mountain, whose surface has been stripped by the winds mostly produced during the winter season plus Yin for hundreds of years, offers us another position of comparison between the Strength or Weakness of the environment and how changes affect homes presented by time.

Note: This article was published in the Newsletter of Feng Shui research Center by the author.